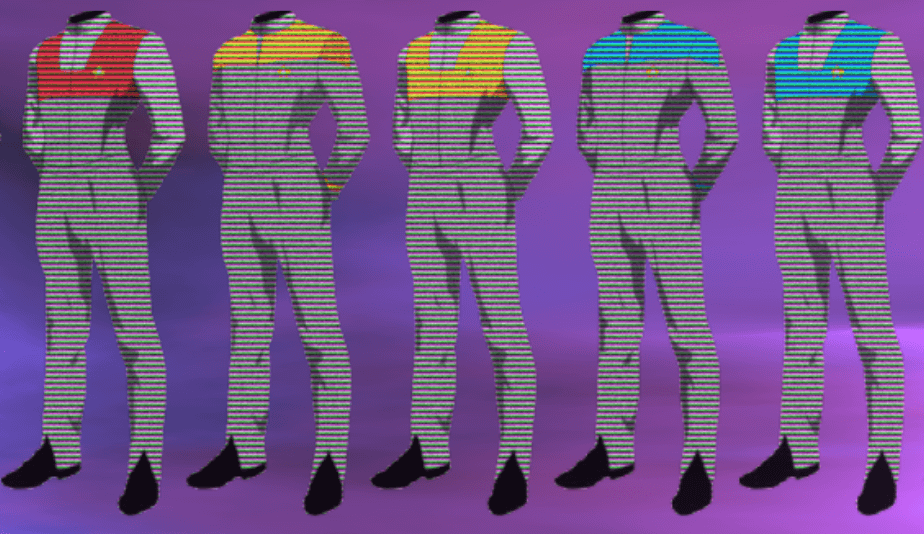 No one can forget the spacesuits of Star Trek: The Original Series (TOS). Over the years, those uniforms became recognizable to even non-fans of Star Trek. Despite TOS’s iconic uniforms, it seems like every Star Trek TV show has a different color scheme for their uniforms. Why does Starfleet change the uniform colors so often?

No reason was given in-universe for the color change, but it had to do with how they looked on the actors of The Next Generation. There are three colors to distinguish roles within Starfleet– Command: red, operations: gold, sciences: blue. However, command and operations used to be reversed.

Let’s take a closer look at Starfleet’s different colors for their uniforms over the years.

Do the Uniform Colors Have Meaning?

The short answer to whether or not the Star Trek uniform colors have meaning is: yes, they do. Typically, the colors that have been used were gold, red, and blue or a variant of each one.

There was a brief period in the Starfleet timeline when command and science roles wore white, while the operations officers wore tan. However, these colors only lasted for one or two films since they weren’t very popular among the fans.

When the franchise first aired with Star Trek: The Original Series, the uniform colors for those in command positions were thought to be gold. It was actually a green color that ended up looking gold under the film studio lights.

Those in command wore this gold during the Star Trek: The Original Series era. It was on characters such as Captain Kirk, Lieutenant Sulu, and Pavel Chekov. In Star Trek: Enterprise, the captain and other command team members wore the same gold color as thin lines along their duty uniforms’ shoulders.

However, with the introduction of the cast in Star Trek: The Next Generation, the command team was shown wearing red instead of gold. We see this color on main characters such as Captain Picard and Commander Riker.

The operations team consisted of careers in engineering and security. In TOS, characters in these fields, such as Chief Engineer Scotty, wore red uniforms. In Star Trek: Enterprise, this red was also shown on the shoulders in thin lines.

Another career field within this group is the communication and helm officers. So, we saw characters such as Lieutenant Uhura wearing this red uniform as well.

In Star Trek: The Next Generation, this was changed to the gold color instead. Characters such as Lieutenant Worf (who was head of security) and Commander Data (who often worked the helm) wore this gold uniform.

The sciences division held members of the medical and exploratory science careers. While the blue color used varies (sometimes it was blue, sometimes it was more teal), this color never changed for this division. Except during that Star Trek: The Motion Picture debacle.

When the Colors Changed and Why

From budget cuts to fabric choices, there are many reasons why the Star Trek cast uniforms changed so much. However, a reason for the shifts in uniform is never given within the franchise canon. There are plenty of theories out there from fans, though. In the end, most of the changes were made by the show’s costume designers for the actor’s comfort or general aesthetic purposes.

What doesn’t always make sense is the change in colors for the command and operations groups. Why switch them from gold to red? The real-world reason is that the actors playing Captain Picard and Commander Riker didn’t look good in the original command team gold. Lieutenant Data was meant to look more washed out since he wasn’t actually human. The red made the actual color of the actor’s skin show more predominantly through the makeup.

Despite this real-life reason, fans can assume the changes were made due to changes in technology, ships, and Starfleet budgets. A personal theory is that once the Starfleet introduced the red uniforms in Star Trek: The Wrath of Kahn, the color switch between career groups would have been easy to make.

Star Trek: The Motion Picture and Their Strange Uniforms

This film is full of weird uniform changes and odd color choices. The uniforms themselves were designed to be form-fitting, which didn’t go well for some actors. In addition to the strange style, the colors were boring compared to the vibrant choices in TOS.

There was still a method to the color scheme, even though it didn’t follow any previous or future generations of Starfleet uniforms. The command team and science division’s uniforms were accented with white, while the color of the operation was light green, security a dark green, and medical was gray. These accents were in the form of ribbons or undershirts of these colors.

Eventually, the colors were changed once again to the choices seen on Star Trek: The Next Generation. Viewers saw the return of the traditional and iconic red, gold, and blue uniforms.

The uniforms saw more than just color changes throughout the franchise. There were many different variants of the outfits depending on the work that needed to be done. For example, there were dress uniforms that changed throughout Starfleet history. There were engineering jumpsuits as well as desert uniforms for hotter weather.

With each new starship that Starfleet introduced, there was a new uniform to go with it. This included new variants for wearing the uniform as well. Star Trek: The Motion Picture was one of the Star Trek films with the most uniform variants. It ended up working against the creators of Star Trek because it caused the crew to look less unified. It didn’t help that the colors were so bland and neutral.

The changes always seemed to utilize the department’s signifying color. Whether it was an undershirt, a strip on their shoulder, or down their pant leg, the colors were there.

Check out the three videos below for a look at all of Starfleet’s uniforms through the years.

What Is the Infamous Redshirt?

Now, there is a famous joke among Star Trek fans about the “extra red shirt.” Typically, if an extra cast member were wearing a red shirt on an away mission, this character wouldn’t see the end of the episode. This tradition of the Redshirt started in TOS but has survived throughout each of the franchise’s adaptations.

Even though we never got an in-universe reason for Starfleet changing the color between the command team and operations groups, we know why the costume designer changed them. The red looked much better on Captain Picard than the gold did. Hopefully, this article has helped provide you with why Starfleet changed the uniform colors.

Photo: [Ships of the Line] For those who consider themselves as die-hard fans of the popular sci-fi Star Trek universe, you may already know that Star Trek’s 24th century has some astounding...

James Tiberius Kirk is arguably Starfleet’s most famous captain of all times. This can be attributed to a host of accomplishments credited to him. His fleet has saved the earth multiple times under...