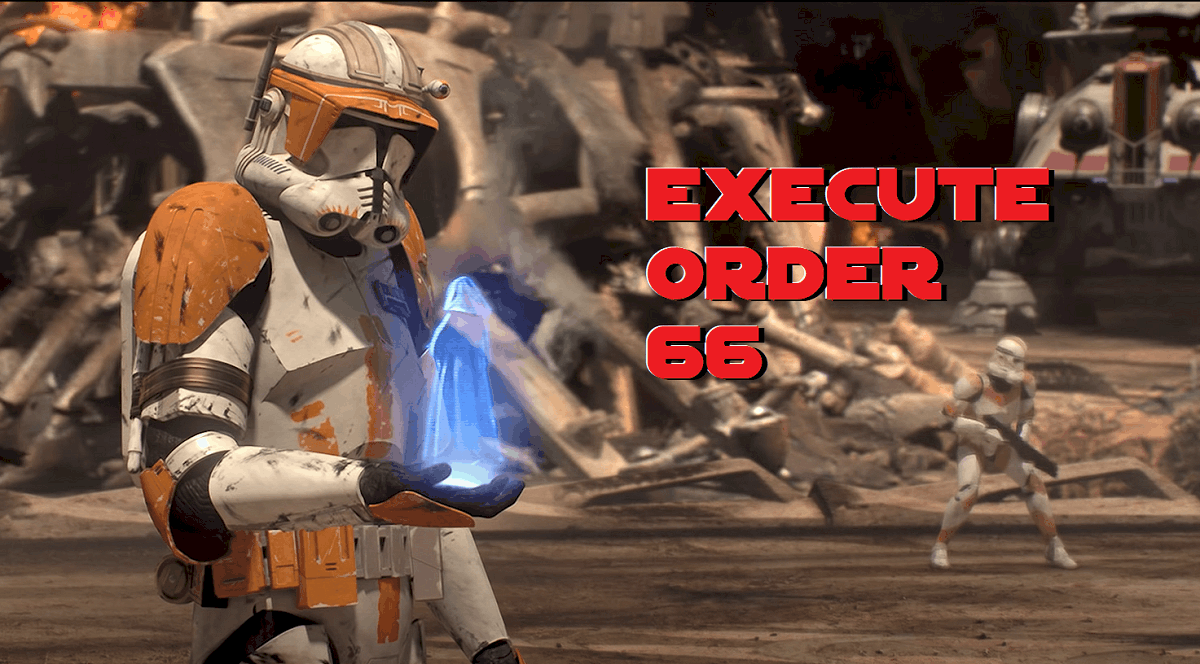 Star Wars fans all know that the infamous Order 66 was a secret order by the Galactic Republic that forced all clone soldiers to execute the Jedi, with whom they had been previously allied, and see them as traitors. This resulted in what is considered one of the most brutal massacres in the Star Wars universe, as every clone was sent the order. Did any stand up against the Empire?

There were clones throughout the galaxy that refused Order 66. In The Clone Wars, Captain Rex, Commander Wolfe, and Captain Gregor remove the inhibitor chips that would force them to go through with it. In Dark Lord: The Rise of Darth Vader, it is revealed that a group of clones on Murkhana also refused.

Emperor Palpatine’s execution of Order 66 is a major plot point of Star Wars: Episode III: Revenge of The Sith as well as the animated series, The Clone Wars, and almost brought the Jedi to extinction. It is also, notably, the order that solidified Anakin Skywalker’s turn to the dark side with his slaughter of the Youngling Jedis at a Tusken village. Read on to learn how these clones resisted and why Order 66 was pivotal in the Star Wars universe.

Order 66 was also called Clone Protocol 66 and was a functionality built into clone troopers that were produced by the Grand Army of the Republic.

It was a standard bio-chip that could be activated by a simple voice command. This is how Supreme Chancellor Palpatine was able to get the clones to turn so quickly on the Jedi that they had been allied with for so long. It was an involuntary response that was programmed into the clones when they were manufactured. As a clone, the only way to not be forced to carry out the extinction of the Jedi was to remove the bio-chip.

Clone Protocol 66 was implanted into the clones as a sort of fail-safe for the possibility that any of the Jedi working with the Imperial clones might go rogue. It was originally intended as a means to prevent singular uprisings throughout the galaxy and not to be used on a mass scale.

That is, however, until Palpatine and the Sith learned about it and decided to use it to bring down the entirety of the Jedi Order. The chain of events that followed after the mostly-successful execution of the order would change the fate of the galaxy forever and cause a disturbance in the Force for years to come.

Those Who Resisted Order 66: Rex, Wolfe and Gregor

In The Clone Wars, there are three clones that manage to remove their Clone Protocol 66 chip and survive the operation.

Rogue Squad on Murkhana Also May Have Resisted

In James Luceno’s Dark Lord: The Rise of Darth Vader, Supreme Chancellor Palpatine tells Darth Vader a story of a rogue squadron of clones on the planet Murkhana that did not turn against their Jedi allies. He explains that even though Order 66 was executed on thousands of other planets and that thousands of Jedi were killed in the process; something happened that made the clones on Murkhana turn against the Empire.

In this case, it is not necessarily clear how the clones managed to work against the programming of Clone Protocol 66. In the book, Palpatine compares their refusal of the order to a virus. He explains that they caught the virus from fighting with the Jedi for such a long time. He laments that there is only so much that programming can do when it comes to a clone’s behavior.

It should be noted that while some people view the books or, as some call it, the EU (Extended Universe), as not being fully a part of the real story of Star Wars. Whether or not you consider this part of the Order 66 myth to be canon is going to be a personal decision that only you can decide.

Who Complied With Order 66?

With the exception of the above examples, every clone in the galaxy followed through with Palpatine’s voice command to execute Order 66. This led to the killing of thousands of Jedi, who were all working, living, and fighting alongside Empirical clones.

Being suddenly attacked by troops they had been previously allied with took the Jedi by surprise, and many succumbed in battle. With three words, Palpatine ordered a massacre of people the scale of which had previously not been seen in the universe.

It is notable that while Palpatine’s order was responsible for the killing of thousands of Jedi throughout the known universe, it is Anakin Skywalker’s own personal turning point in his journey to becoming Darth Vader.

Having folded to the pressures of the dark side, Anakin follows Palpatine’s command and slaughters a training camp in a Tusken village that is made up entirely of Jedi padawan children. Of all the killings that happened due to the order, these were perhaps the most significant in the fight for the balance of the Force.

The Dark and Lasting Impact of Order 66

With Anakin Skywalker having turned to the dark side, Palpatine saw the rise of his Empire in every corner of space.

With the Jedi almost completely wiped out and one of the most powerful of them now serving him as Darth Vader, he was now looking at ruling the galaxy almost unopposed. That is until a small group of surviving Jedi, including Obi-Wan Kenobi and Luke Skywalker, lead the Rebel Alliance to a victory at the Battle of Yavin.

There were so few Jedi that survived Order 66 that they were almost completely unheard of for almost twenty years between its execution and the Jedi’s triumphant return in Star Wars IV: A New Hope. A few outliers, including Jedi Masters Yoda and Obi-Wan Kenobi, continued the traditions that had died out along with the Jedi killed by the clones.

The impact of Order 66 on Anakin Skywalker and his transformation to Darth Vader cannot be overstated. Perhaps one of the darkest moments in the Star Wars universe, Anakin’s slaughter of the Jedi padawans, was instrumental in his crossing over to the dark side of the Force. Without committing an act as brutal as that, he may not have become the ruthless and terrifying presence that has scared audiences of all ages for so many years.