Quick Navigation
Quick Overview
Pros
Cons
Lego Star Wars Betrayal at Cloud City
Who Is This Product For?
What’s Included?
Overview of Features
How to Get the Most Out of This Product
Alternatives
Conclusion 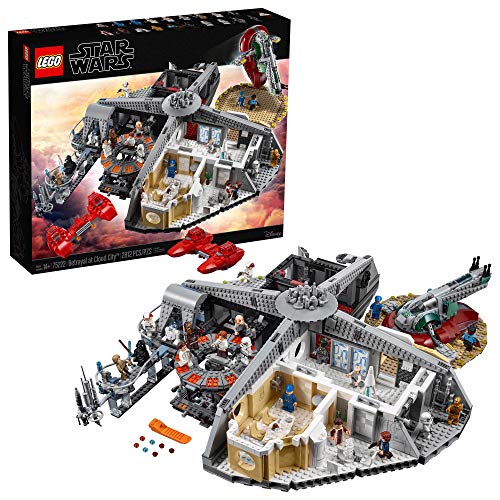 Depending on who you ask, you’ll find no shortage of Star Wars fans who will tell you that Episode V - The Empire Strikes Back, is the greatest Star Wars film of all time. In fact, it’s also commonly considered one of the greatest movie sequels of all time as well. This is largely because the movie features SO many iconic scenes. The Battle of Hoth, the Darth Vader –Luke Skywalker plot twist, the introduction of Yoda, and pretty much everything that happens on Cloud City. Now, thanks to Lego Star Wars, you’ll be able to recreate the famous Betrayal at Cloud City with this 2,812 piece set.

Cloud City hosts without a doubt some of the most memorable scenes in the entire Star Wars film franchise. Between Han Solo being frozen solid in carbonite, to the first appearance of cult favorite character Boba Fett, to the iconic battle between Darth Vader and Luke Skywalker where the latter loses his hands and finds out some truly troubling family news. Now you’ll be able to relive all of those famous scenes with your very own Lego Star Wars Betrayal at Cloud City set.

It should go without saying that this is a perfect gift idea for any die-hard Star Wars fans in your life — especially if they find themselves in that “Empire Strikes Back is No. 1!” camp. It’s also a great option for letting your kids explore their creative side. This Cloud City set is compatible with all of the other Lego Star Wars sets that have been released as well, meaning you can mix and match to your heart's content.

A whopping total of 2,812 pieces are included with this Lego Star Wars set. You’ll be able to assemble a miniature version of Cloud City with those pieces, complete with several of the most iconic areas from the film. The package also (thankfully) includes a detailed set of instructions that will show you exactly how to assemble Cloud City.

There are plenty of Star Wars goodies that you’ll be getting with the Lego Star Wars Betrayal at Cloud City set. First and foremost is the fact that you can build your very own Cloud City, complete with some of the most popular locations from The Empire Strikes Back, including a carbon freeze chamber, interrogation room, a landing pad with Boba Fett’s Slave I ship, a detailed promenade, a dining room that seats up to five characters, a garbage processing room that even has an incinerator, and last but not least, a sensor balcony for hosting your own Luke Skywalker versus Darth Vader battles.

As you can probably imagine due to the fact that this Cloud City set comes with 2,812 pieces, it’s highly recommended to follow the included assembly instructions. There are far too many small pieces to attempt it on your own — save yourself the hours of frustration and hair pulling and just follow the instructions.

With that being said, it’s worth pointing out again that all Lego Star Wars sets are compatible with each other, meaning you can flex your creative muscle by mixing and matching to come up with your own truly epic space battles. You can also have a peek around our site to see some of the other great Lego Star Wars sets that we recommend.

If Cloud City isn’t really your thing when it comes to iconic Star Wars locations, not to worry. Lego has also released quite a few other fan favorite sets that you can check out, such as this Lego Star Wars Palpatine's Arrest set. You’ll be able to reproduce the famous scene from the end of Episode III - Revenge of the Sith. It even includes a few mini figurines as well, including Emperor Palpatine, Anakin Skywalker, Mace Windu, and others.

While there’s certainly no shortage of famous locales to be found within the Star Wars universe, not many of them can boast of hosting as many important moments as Cloud City. Being able to build a miniature Lego version that includes so many of the best locations from The Empire Strikes Back is sure to put a smile on the face of Star Wars fans. The fact that it includes so many mini-figures to re-enact your favorite scenes is an added bonus.